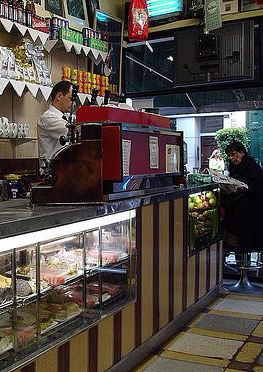 I am amazed by the whole coffee phenomenon that is taking place in England. I recently counted twenty-two coffee shops, just on Church Road in Hove alone, between Palmeira Avenue and Sackville Road. Twenty-two in one mile, and that does not include restaurants.

I remember there was a time when Bar Italia in London, opposite Ronnie Scott’s, was the only place where you could get a good cup of coffee. I used to get so upset that I could not buy fresh ground coffee in supermarkets. It was important to me, as I come from a family of serious coffee drinkers.

One day, a few months after my arrival in England, my Father announced that he would be coming to visit me in London. He was asking what I needed, as there was plenty of space in the back in his old VW bus. I was so excited, I could not think properly. I needed so much and was missing so much, but now that I was asked I could not think of anything. ‘Papa, can you bring a hand grinder for coffee beans?‘

That was all I could think of!

‘Ha ha, that’s my girl! I brought you up well, you have got your priorities right, I am so proud of you, Spatz.‘

There was a time when drinking coffee grew into an obsession for him, and the making of a good cup of coffee turned into a painful ritual for all onlookers, which could take all morning.

Here is a little episode with Manfred, my Father, on how to make the perfect coffee, the German way:

He opens a bag of coffee beans and takes in the aroma.

‘Ah very good! Ok, next you need a hand-grinding machine for the beans. The electrical ones are no good. You have to have feeling; even though you are killing them, kill the beans gently, ha ha.  No, Spass bei Seite, I mean, you don’t want to lose the oil in the beans.‘ 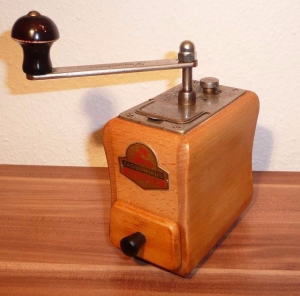 He passes the grinder to me and I have to start grinding as my Father needs at least one extra assistant for this complicated process.

‘Vorsichtig, genau! Then you boil the still water from the bottle, not tap water, that’s too hard. Ok now look, I put unbleached filter paper in the porcelain filter and now that the water has boiled, we warm the coffee pot with it.‘

Trying to speed up the procedure, I am about to pour hot water into the filter, when he declares, ‘No, no, you have to wait before you use the hot water for the coffee. It mustn’t be still boiling, that will make the coffee bitter.‘

‘Argh!‘ He suddenly slaps his hand to his forehead, as if something dreadful had happened.  ‘I forgot we need to warm the milk next, Spatz get me another pot, ok, so let’s warm the milk.  No, not too hot, we don’t want the milk to boil. Don’t you know anything?!‘ Now he is getting annoyed with me.

It’s coming to a critical stage as he has two things going on at the same time, coffee and milk.

‘Ok, now we can put a bit of hot water in the filter, but just a little to cover the coffee. Enough, that’s fine, now we wait. Can you smell it? Ahh that’s good, smell this. Oh no quick, the milk! Take it off the heat, it’s boiling, what did I say… Never mind, ok now we put a bit more…….‘

Strangely, his guests would often politely refuse a second cup.