It was in the height of political turbulence in 1990 when I made up my mind to start my own business. 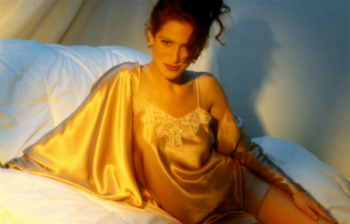 When people were losing all they owned, everything they worked for, with interest rates rising to a phenomenal height, I decided to set up a business designing and selling silk lingerie using expensive silks and lace insets from France. I had no contacts in fashion and had no business plan.

I could have not been more naïve and removed from reality, but I found a fabric called silk jersey and I was in love with it. It was soft, light, stretchy, and natural, would let your skin breath, keep you warm in the winter and cool in the summer. It was amazing and it was also very sexy.

‘Every woman should wear silk jersey next to her skin!’ I was absolutely sure about that.

Years before, the Iron Lady, Margaret Thatcher set up an ‘Enterprise scheme’ and I felt that if I received the £40 a week for a year, which was paid by the government for business start-ups, I would be able to survive and be independent.

I finished working for the Glyndebourne Festival Opera in the middle of August and had managed to save some money of my own. Having decided to stay in Brighton, I found a little room in the basement of a shop called ‘Features’ in Kensington Gardens. My own studio!

After three years in England I had a place of my own. This was my creative home. With the money I saved, I managed to buy a second-hand industrial straight stitch machine and an old overlocker. Both machines came from a Marks & Spencer’s lingerie factory in Worthing. They were very old, but as smooth as silk velvet. I bought an iron and an ironing board, a second hand full-length mirror, and a little radio. I hammered long nails into the wall behind the cutting table to hang up my first patterns and samples. My friend Dagmar from Dusseldorf sent me as a present my first big cutting sheers. They were beautiful and fitted my hand perfectly, not too big, not too small, but so sharp, they just sliced through the cloth.

I painted the stone walls of my studio white and hung up pictures and sketches and fabric samples on a cork pin board. I also went to a carpet shop nearby in Gardener Street and ordered a cheap industrial carpet. I carefully measured out my room and was so disappointed when the guy in the shop told me, ‘We don’t do metres and centimetres here. We do everything in yards and feet. Sorry love!’

Oh my god! Feet, yards, inches and stones? It felt like we were a million miles away from Europe.

There was an English girl working part-time in the shop above my studio, and I told her that I needed to re-measure my room downstairs in feet and yards.

‘It’s easy,’ she declared, ‘one foot is eight inches!’

So I took my calculator, transferred my centimetres into inches and those into feet and proudly returned to the carpet shop.

‘There you are, that wasn’t difficult now, was it?’ the man said to me patronisingly.

I was told I could come and pick up the carpet a week later. I could hardly wait. The carpet would make such a difference and would finish of my little workspace perfectly.

When I picked it up the following week, I was surprised how easy it was to carry. Arriving at my studio I instantly knew this carpet was far too small. I rolled it out and it was more like a rug fitting just under my cutting table.

I went straight back to the carpet shop; luckily I found my little piece of paper on which I had scribbled the measurements of the room and the way I transferred the inches into feet. The man at the till took out his invoice book and my piece of paper. He compared the measurements, but suddenly started to smile when he looked at my calculations. His smile turned into a chuckle and then into roaring laughter. ‘Love, there are twelve inches in a foot not eight! Oh dear, that’s very funny!’

On the 22nd of November 1990, I was beavering away in my studio listening to the radio. The country was suffering and people were frightened; there was no money, no jobs, and houses were being repossessed at a sensational level. Doom and gloom was everywhere.

But on that day in November, life became exciting again, as by lunchtime the BBC news declared that Margaret Thatcher was forced to stand down. She had done enough damage to the country and suddenly there was a glimpse of hope again. It would take a long time, but change was starting to happen from that day.

Trying to sell exclusive silk lingerie at that time was…I can’t stop laughing now, so ridiculous. What was I thinking? But just like being in love, I just had to do it; there was no rhyme or reason.